My fellow hams... My name is Bill and I love ham radio.  I discovered ham radio when I was 13 years old, but because I was a poor kid living with a single parent on the wrong side of town it took me two years to scrape together a station.  In 1968 I was licensed as WN2FSV and had a blast operating cw mostly on 40 meters with a primitive novice station.  For the next forty years I managed to stay active, but over time I found myself spending lots of money on fancy rigs and filling fewer and fewer log pages.  Then in 2008 (my 40th year as a ham) I decided to do something I hadn’t done in a very long time...build something!  I found my old 1968 ARRL Handbook and took on the task of re-building my old novice station...Regen receiver and 5763 pentode (that’s a tube) crystal controlled transmitter.  It was fun again!  I found that I can’t stop and the simpler the better.  I’m having fun and I hope you will join me. You can do a lot with less than a watt...73, W4FSV

Found this picture of me from 1979.  It is a young me working the graveyard shift at Fairchild Electronics trouble shooting 12 by 24 inch four layer circuit boards.  It was a good experience, but I never could get used to the hours.

Last weekend (since Covid 19 changed the rules) I decided to try a little test.  I have often wondered how much easier it would be to make low power contacts if more hams would try to work weaker signals rather than move on to the 599 club.  So, for the 2020 field day I operated with my Elecraft K2 at no more than one watt.  I only had 4 hours 30 minutes to operate...and that was enough to convince me that I might be on to something. On field day, every contact is worth points!

Here's a snapshot of how I did.

I always say...YOU CAN DO A LOT WITH LESS THAN A WATT

In the last few months, I have been developing new kits.  Everytime I order a prototype circuit board it costs $100.00.  I have spent $600.00 on proto boards, so you see I am pretty serious about the new transceiver, receiver and two new accesory kits in the works.

They will come out one at a time as I still have to write manuals.  Still a secret, but here's a clue...the transceiver does something unique and I have made 12 contacts with the prototype!  Also, it is our first kit in a cabinet!

Two nights before the QSO party, I was asked if I could participate by operating as the CW bonus station.  I said yes, although I could only work part of the contest.  Now I know what it must be like to be a DX station!  Pile-ups developed as stations called for the 250 point bonus.  It was both fun and a little like work.

I finally got to go to Hamcation in Orlando, FL.  Always wanted to, but never got to attend. I had a very nice time seeing all the "stuff" in the flee market and visiting all of the dealer booths inside the halls.  Bought a very nice paddle from N3ZN Keys and a few books.

I also walked aroung with one of my Splinter II's and Matchstick tuners with a whip antenna hanging from my neck..."pedestrian mobile"...plenty of looks and nice comments.

I am now including a bag of assorted parts with every order!  If you are building something on your own and need a special part, please ask and I will see if I have something that will work for you.  No charge (but postage would be appreciated).  Just email or call me.

Just back from the Shelby Hamfest where I gave a session talk about QRP and QRPp.  The room was filled, so there is plenty of interest in QRP out there.  In the afternoon on Saturday I led a kit building session, which I believe was a first for the Shelby Hamfest.  Only three kits were assembled, but four hams watched and two took kits home to build later.  Not bad since the build session was only announced a few days before!

Too hot to camp and go portable during the summer in Texas. Been 114 degrees here. But, planning a fall camping trip with an opportunity to set up a portable shack and work 40meters with my Splinter II transceiver under a star lit sky on the highest spot in the Texas Hill Country. The rig fits nicely in the 17 inch travel case. Even included my Sawdust Regen Receiver. Ready for casual listening or serious DXing on 1/2 watt.

The Following are Selected Entries from 2013 to 2018 Copied from my old website.

The Thrill of DX

Last night I finished building a Splinter for a ham friend who is disabled.  I finished at about 11:00 p.m. local time and plugged in an antenna and power supply.  I aligned the receiver and checked the spot function.  Then, under the spot tone I heard a CQ.  What the heck...I gave a call.  The guy came back with a QRZ?  So I gave another call.  This time he came back with my call and a RST 339.  The operator was OK2LT in the Czech Republic...a 10,412 miles per watt contact!  (Just posted the video under the Splinter) No, it doesn’t happen every time with 450 milliwatts, but when it does it’s more fun than a brand new Asian Rig with about one knob per watt!  04-19-13

Two weeks ago, our local Ham Radio Club participated in a “makers fair” at the state museum.  Our display included a table with three code oscillators and keys.  The caption on our sign said: Learn the Secret Code.  Those  three code oscillators were the most popular attraction at our display...and possibly at the entire event.  Kids were lined up for a chance to send their name and copy a message to win a piece of candy.   And they were good at it too!   06-24-13

I have never been to Dayton or the QRP event Four Days In May.  I hope to go someday, but you see my birthday is May 17th and it always conflicts.  My wife, kids and grandkids insist that I’m there at my party!  As thrilling as it must be to go to Dayton and FDIM, I had my own QRP adventure about a month earlier.  On April 16th I finished my own building session...the Splinter II prototype.  Later that evening I made the first two contacts with the Splinter II...KK4GFR, Jim in Clarkson, KY followed by KF2UZ, Jack in Hyde Park, NY.  Then on the 17th, I worked SV1ENG in Greece (see above).  On the 23rd I worked PA3BUD in the Netherlands.  Finally, on the 24th I had a QSO with SM6CWK in Sweden.

These contacts were especially nice since they were all new countries for my QRPp totals.

Yes, I really wanted to go to Dayton, but my Four Days In April were still pretty cool!

made ham gear to a “Maker’s Fair” held at our state museum.

A man and woman came by with a small infant

(I would guess about a year old).  I was demonstrating sending

dad to get closer.  She kept reaching out her right arm until dad

let her get in reach of the Splinter (with my permission).

Now here’s the amazing part, and I swear it is true.  She put her

index finger on the key and tapped out:

Here I am operating on foot from the Shelby Hamfest

using a Splinter II, Toothpick and Matchstick.  The

antenna is a modified fishing pole with a six foot wire

running through it!  Was only used for demonstrating the

receiver since I figure the antenna efficiency was about

did load up!  Had a great time showing off!

(see video on the Products page)

Recently I was invited to give a presentation about QRP

at the Citrus County Amateur Radio Club in Crystal River,

Florida.  So last night I delivered on the invite.  I enjoyed

the hospitality of the club members and my hosts and I

think they enjoyed learning a little about the fun we

A few days ago I spent the afternoon at the South Carolina State Museum in Columbia.  I was there to update and repair a display about Morse Code.  The display explains all about Morse Code and included two hand keys attached to two flashing lights and old buzzing sounders.  Unfortunately, none of it has worked for several years!  I asked the museum if I could repair and update the display at no cost to them...and after a few weeks I received the go ahead.  I donated two code practice oscillators and the Columbia Amateur Radio Club donated two new keys and the power supplies.  While I was there about 12 kids on a school field trip came by.  They all were eager to try out their “fist”.  It amazes me how interested and quick to learn kids are.  Thanks to the State Museum for giving us the opportunity to give back to a hobby that has been dear to me for many years!

A Boy, A Radio and His New Antenna

balun kit and Off Center Fed Dipole.  What is remarkable about

tree at only 30 feet and the other end is flat on the ground!

of coax leads from the balun to the rig!

In this 30 minute test I worked PJ4X (Bonaire),

I am sad to announce the passing of John Crockett, W3KH.  John was the Vice President of Engineering for South Carolina Educational Television.  John was also a past president of the Columbia Amateur Radio Club and the nicest guy you could ever meet.  I am sure that he taught and helped at least a thousand new hams get licensed. John was instrumental in the development of the SCHEARTS system of microwave linked amateur repeaters across South Carolina.  This system was put to the test last week as Hurricane Matthew ravaged the coast of South Carolina.  The system worked well and I used the network myself on Saturday morning from our County EOC. Although very ill, I am sure that John realized that the system he was so proud of was instrumental in protecting lives and property.  On a personal note, four years ago when I was developing my first kit (the original Splinter) I was having trouble getting the low pass filter correct.  I asked John for help. He allowed me into the lab at SC ETV and together we used some very “top end” test equipment in order to design a filter to meet FCC regulations.  Breadboard Radio might not be here today without the electrical engineer, the educator, the ham and the nicest guy you could ever meet. Thanks John. I will miss you.

Here is a photo of the new version of the

connected to a prototype of the Woodchip

after making the first QSO with the pair.

Friday night with KN4YB.  Tom gave me a

Last night I gave a talk and demo of Ham

Radio to a group of 50 Cub Scouts in West

equipment and we talked about QRP and

many questions.  I gave them leads on how to

find out how to build a crystal set. 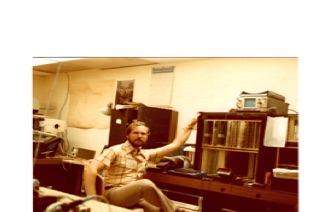